Geopark is a program that aims to build a sustainable society by utilizing the region’s academically valuable natural and cultural heritage in the area for conservation, education, and tourism.

We are working to ensure that the town of Shikaoi will continue to be prosperous 50 to 100 years from now.

As of April 2020, 43 regions in Japan have been certified as Geoparks. Nine of them are UNESCO Global Geoparks. 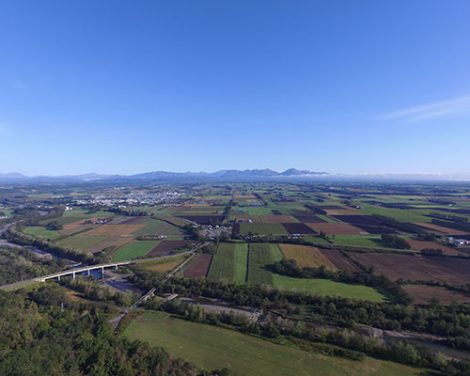 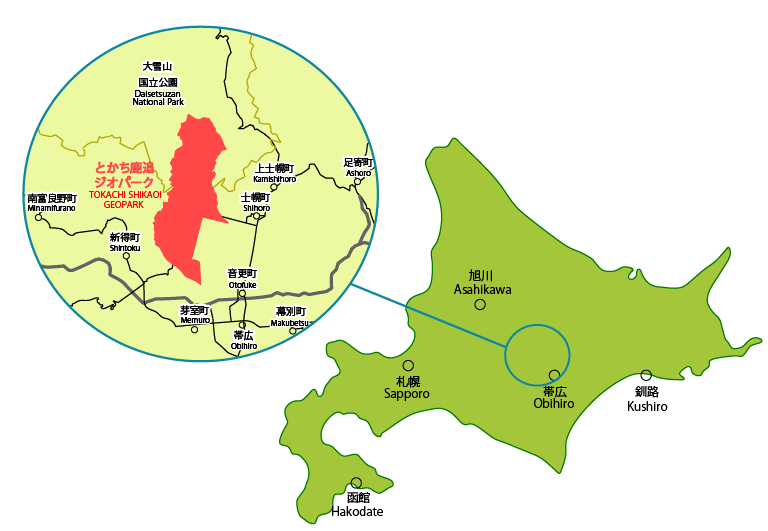 Shikaoi Town has been used as a place for tourism and education, as a place where people can enjoy and learn from the diverse natural attractions.

The town also has a geologically unique natural heritage, and is promoting Geopark activities in order to preserve and pass these on to future generations while using them.

A Story of Life Nurtured by Volcanoes and Frozen Ground(Shibare)

The Tokachi Shikaoi Geopark has been certified as a geopark where you can feel the topography and phenomena created by the cold, which cannot be seen in other geoparks.

The mountains around Lake Shikaribetsu were created by volcanic activity in the past, and are called the Shikaribetsu Volcano Group.

The land of Shikaoi was created by the repeated volcanic activity and the action of rivers about one million to ten thousand years ago.

Lake Shikaribetsu was created when a river was blocked by volcanic activity.
From the sky on the northern shore of Lake Shikaribetsu, you can see how the lake was formed.

Lake Shikaribetsu, which was formed by the damming of a river, is home to an endemic species of Miyabe char. 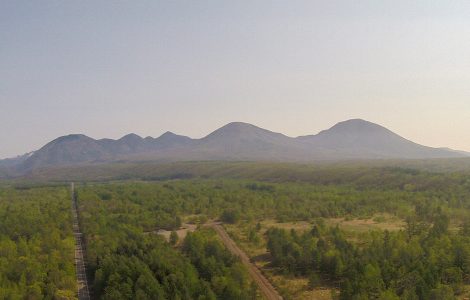 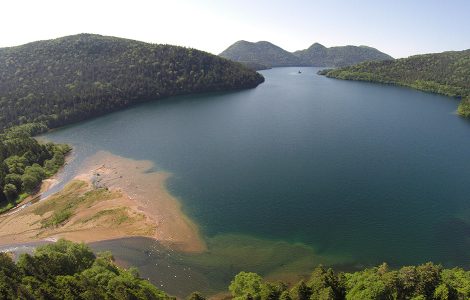 A story of the frozen land

Shibare is a Hokkaido dialect word that describes the freezing cold. The cold climate that has persisted since the past has brought a variety of landforms and rich ecosystems to the land of Shikaoi.

Around Lake Shikaribetsu is home to one of the largest wind tunnel areas in Japan.
Permafrost containing ice from 4,000 years ago, the oldest in Japan, was found underneath the wind tunnel area in 2008.

The cold, moist environment around the wind tunnel has nurtured a forest similar to that of the Arctic Circle.
At Mt.Higashi-Nupukaushinupuri, you can see the wind tunnel and its characteristic vegetation while hiking.

Enjoy freezing in the ice world 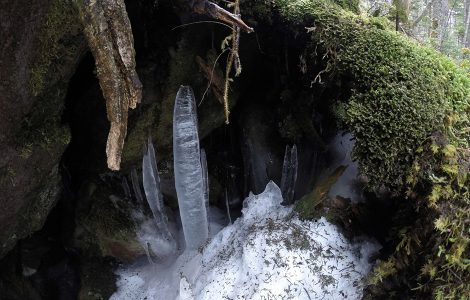 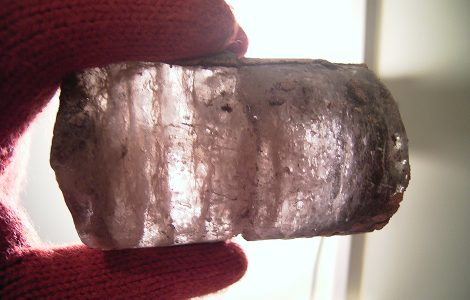 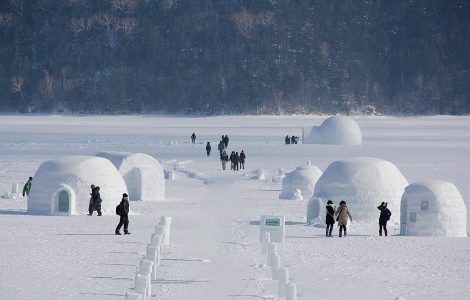 The nature and land of Shikaoi Nurtures life

In the area of ​​Tokachi Shikaoi Geopark, there is an untouched natural environment in the mountainous areas and a lot of life in the cultivated field and dairy areas on the plains.

Around Lake Shikaribetsu, with its rugged rocks and wind tunnels that blow cold winds even in summer, is home to Ezonakiusagi,an endemic subspecies of northern pika, which is said to be a survivor of the Ice Age.

Lake Shikaribetsu is also home to Miyabe char, a uniquely evolved subspecies of Oshorokoma. The habitat of Miyabe char has been designated as a natural monument of Hokkaido.

The soil in the fields of Shikaoi Town is Kuroboku soil, which is based on volcanic ash.

In Shikaoi Town, crops that match the characteristics of the soil and the climate are grown, and typical examples are potatoes, sugar beet, beans, and wheat. There are many restaurants and specialty shops in the town that use these local ingredients. 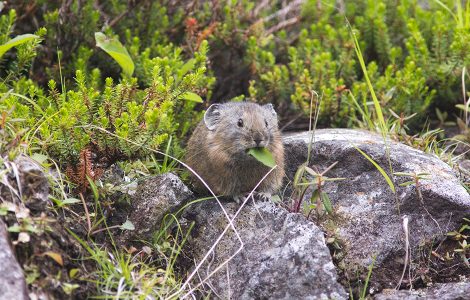 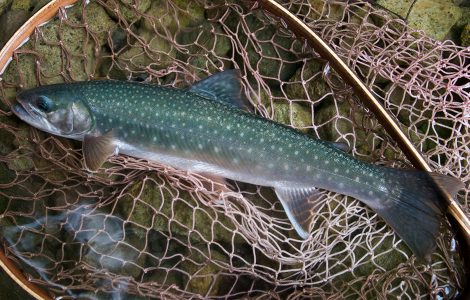 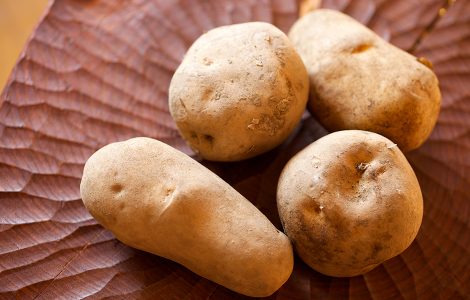 Exterior of the visitor center

The visitor center introduces the origins and characteristics of the land of Shikaoi Town, and the highlights of each season.
We also provide traffic conditions and tourist information on the neighborhood.

Learn about the Geopark by seeing, touching, and feeling

At the visitor center has a number of interactive exhibits that allow visitors to experience and enjoy learning.
Don't miss the projection mapping that uses a three-dimensional model of Shikaoi Town.

We will guide you at the visitor center.

At the visitor center, our staff will explain according to the age and interests of the visitors.
Please contact us if you would like an explanation in English.

Entrance sign at the corner to the visitor center

The Visitor Center is located on Road 85, Shikaoi-Nukadaira Route, heading toward Lake Shikaribetsu, and turn at the entrance sign with the logo (about 300 meters).

The Tokachi Plain stretches out toward the Pacific Ocean with the Daisetsu Mountains and Hidaka Mountains, known as the roof of Hokkaido, in the background. Shikaoi Town is located in the northwestern part of the Tokachi Plain.

In the northern part of Shikaoi Town, there is an untouched nature designated as Daisetsuzan National Park. There are mountains called Shikaribetsu Volcanic Group and Lake Shikaribetsu, where you can enjoy hot springs and climbing.
In the southern part of Shikaoi Town, a vast agricultural land that occupies 30% of the town area spreads, and upland farming and dairy farming are carried out.

In Shikaoi Town, there are professional guides who offer a wide variety of nature experiences such as canoeing, trekking, horseback riding, fishing, ballooning, and dog sledding etc… 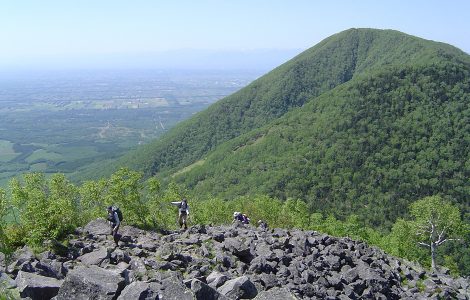 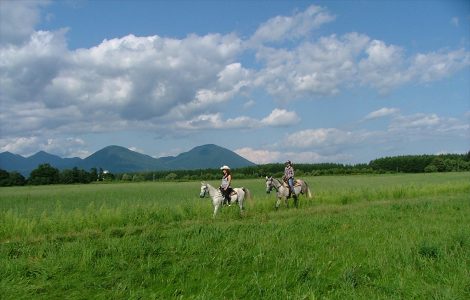